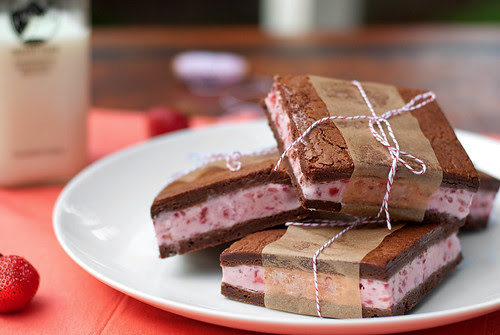 Oh, native strawberries. No grocery store bought, California grown, off season strawberry can compare. But they're here and gone in a flash! I don't want to say goodbye!

That's why I make ice cream. Well, among other reasons... But it lets me enjoy those sweet little berries for just a bit longer. Besides, cream and strawberries were meant to be together.

I don't just stop there though. I like to turn that strawberry ice cream into something even more special - ice cream sandwiches made out of thin, chewy brownies! Because cream, strawberries and chocolate should have lots and lots and lots of babies.

The brownie layer stays surprisingly brownie-like with a nice shiny, crackly top - just how I like them. And the strawberry ice cream, well, it's perfect. Rich and creamy, slightly sweet, and bursting with tons of strawberries. Go forth and try it before it's too late! 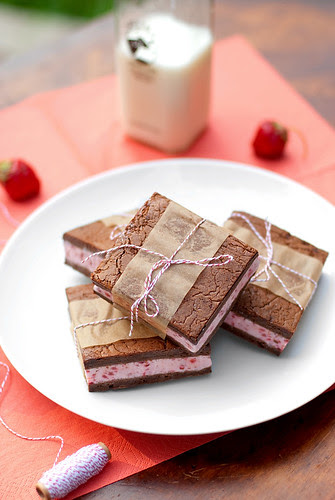 1. Combine cream and salt in a heavy saucepan and bring just to a boil. Remove from the heat.

2. Whisk the eggs with 1/2 cup sugar in a medium bowl, then slowly add the hot cream in a thin stream, whisking constantly. Pour back into the saucepan and cook over medium-low heat, stirring until slightly thickened and a thermometer reads 170F.

3. Immediately pour the custard through a fine mesh sieve into a bowl and let it come to room temperature, stirring occasionally. Chill, covered, until cold - at least 2 hours and up to 1 day.

5. Once the custard is ready, puree the strawberry mixture in a blender until smooth (I like to leave a few little chunks, and I don't strain it.) Stir puree into the custard.

6. Freeze the mixture according to your ice cream maker's instructions. If you're making ice cream sandwiches, now would be a good time to assemble them while the ice cream is soft so you don't have to thaw it again. Otherwise, transfer to an airtight container, cover and freeze until firm.

2. In a small saucepan, melt the butter over low heat. Remove from the heat and add the chocolate, stirring until melted. Set aside to cool.

3. Sift the flour into a small mixing bowl and set aside. In a medium mixing bowl, combine the eggs, sugar, salt and vanilla. Using a mixer fitted with the whisk attachment, beat on high speed until the mixture thickens and becomes pale in color and falls from the beater in a wide ribbon that folds back on itself and slowly dissolves on the surface, 4-5 minutes.

4. Fold the cooled chocolate into the egg mixture. Add the flour and fold it quickly but gently until well incorporated.

5. Divide the mixture evenly between the 2 baking dishes, smoothing the surface with spatula or large spoon. Bake until the top feels set and the batter has just baked through, 7-10 minutes. Let cool to room temperature in the baking dishes on a wire rack, then turn out onto the racks to cool completely.

6. To make the sandwiches, let 2 pints ice cream soften just until spreadable. Line a 9x13 inch baking dish with plastic wrap, allowing enough overhang to cover the top of the sandwich completely when it is assembled. Place 1 brownie layer, top side down, in the lined dish. Scoop the ice cream out onto the brownie and spread evenly and quickly with a spatula. Top with the second brownie layer, top side up, and gently and evenly press down on the second layer. Fold the plastic wrap over the top, covering completely. Using a square plate or book, press down with firm, even pressure to distribute the ice cream evenly. Freeze for at least 3 hours.

7. Uncover the top, turn the sandwich out onto a cutting board, peel away teh plastic wrap and cut into desired size with a large, sharp knife.
Posted by Morgan at 4:07 PM